Aztec human sacrifice primarily involved the sacrifice of captured enemy warriors. This ritualized murder was practiced regularly, on monthly occasions, with the intention of obtaining “chalchíhuatl, the precious liquid drawn from the sacrificed victims, the only suitable nourishment for the Sun” (León-Portilla 60). By spilling the blood of sacrificial victims, the balance of the universe was maintained. However, these glorified public rituals also served a political motive, as they frightened spectators through public displays of violence— in addition to symbolically aligning the Aztec empire’s continuous campaign of expansion with the righteous cause of keeping the universe in existence.

Although usually a priest would use a flint knife to remove the heart from the victim, sometimes a style of sacrifice would take place which the Spanish conquistadors referred to as “gladiatorio,” in which the victim would be tied to a circular stone, given simple wooden tools, and made to defend himself to the death against fully armed Aztec warriors. If he was victorious, he would live to see another day. This particularly sadistic style of human sacrifice was unique to the Aztecs… Except that it wasn’t.

In fact, most of what you just read can be somewhat applied to Roman gladiatorial fights, which were state-sponsored, took place in public venues, involved bloodshed and often death, and were fought by captured enemy warriors or prisoners. Personally, I believe both of these customs to be comparable to bullfighting, which has been practiced in Spain for thousands of years. Indeed, bullfighting is a type of public performance in which the performer is in mortal danger, a performance which is steeped in tradition and also carries great cultural significance despite attacks from outsiders who see it as barbaric. This sort of blood sport is certainly not unique to the Aztecs, and although theirs may seem particularly brutal through modern eyes, are the Spanish really ones to judge? 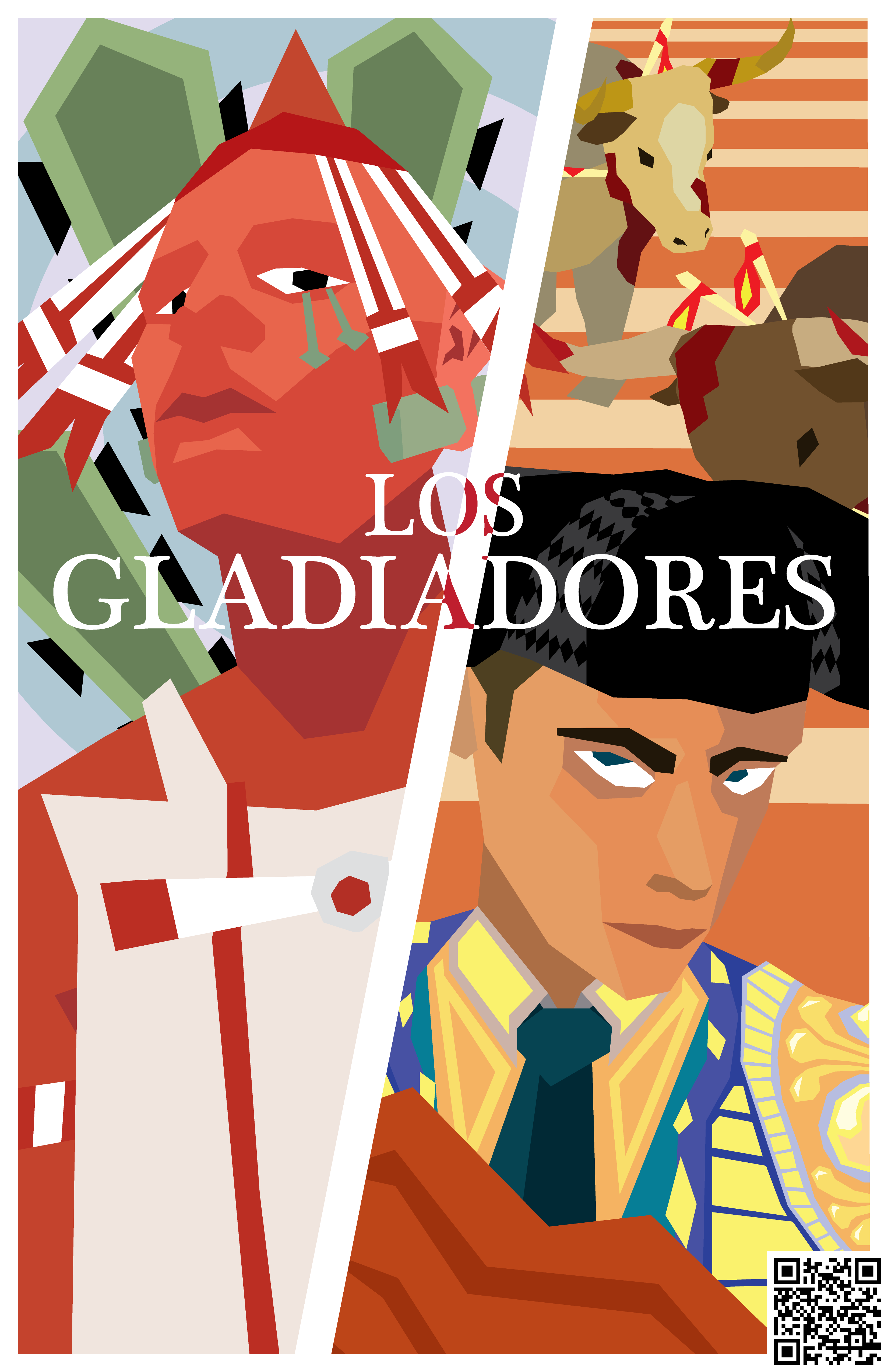 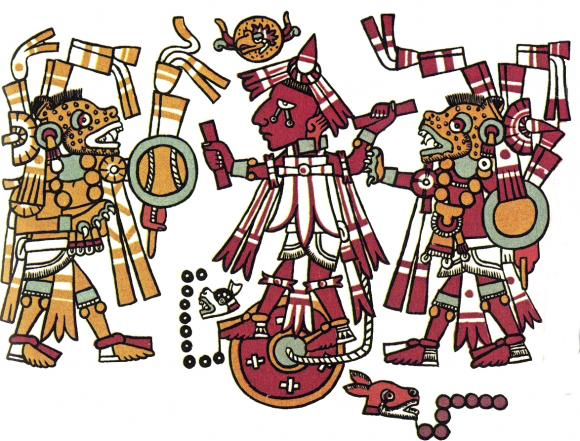 
Although most of us are familiar with Spanish-style bullfighting, Aztec gladiator-style sacrifice is not as well-known. The scene represented in the left half of the poster draws inspiration from the above illustration, taken from the Codex Zouche-Nuttall. The sacrificial victim, center, is shown attempting to fight off two jaguar warriors using a simple wooden weapon. He is tied by the waist to a temalacatl, a large round stone used for this purpose. 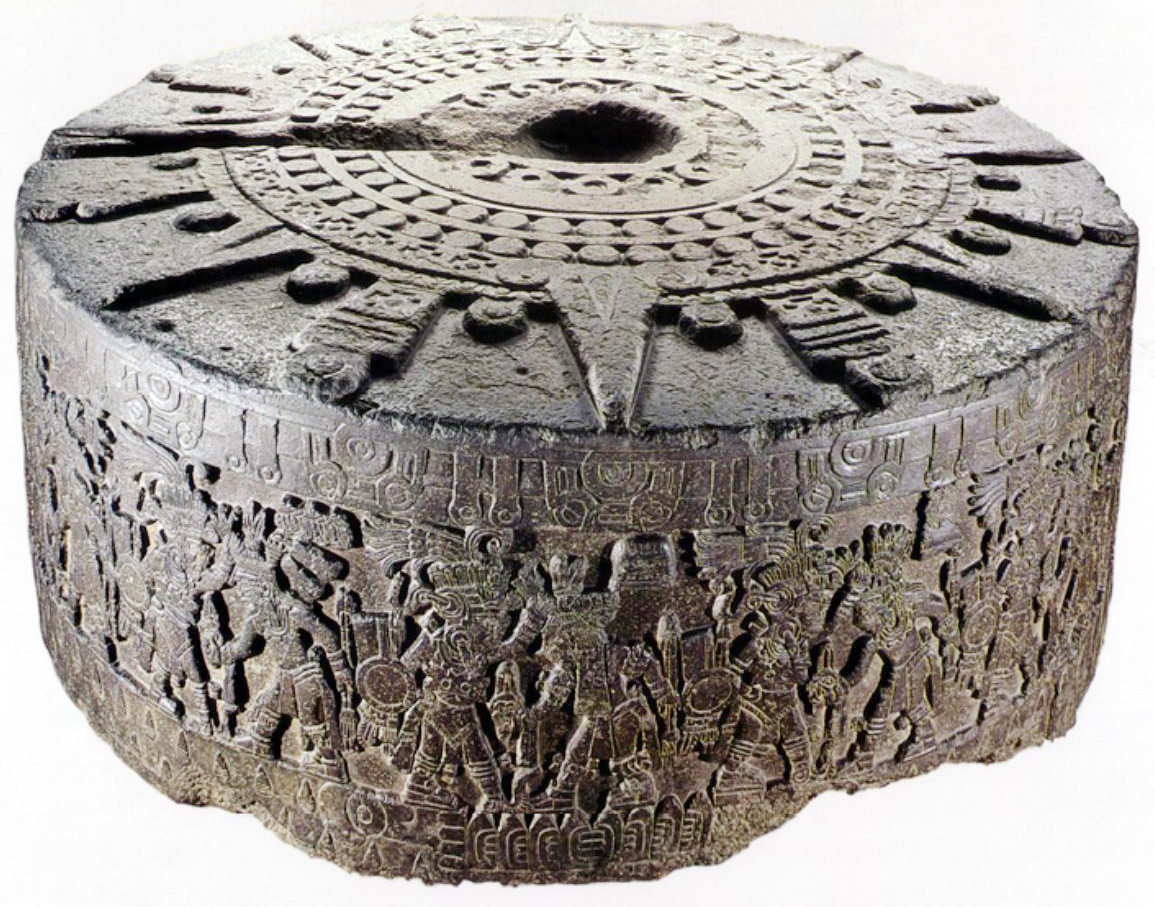 
The Tizoc Stone, shown above, is probably the most famous Aztec sacrificial stone, due in part to its excellent condition. It was used either as a temalacatl or a cuauhxicalli, which was a receptacle used in sacrificial rituals for the hearts of victims. The gruesome nature of these rituals can be shocking to us; to the Aztecs, capture and public sacrifice were accepted as intrinsic parts of warfare.