This illustration contrasts the well-known figure of the Virgin Mary, on the right, with a statue often thought of as a masterwork of Aztec sculpture: the eight-foot-tall stone sculpture of the goddess Coatlicue housed in the National Museum of Anthropology in Mexico City.

Coatlicue, whose name means “snakes her skirt,” is a mother goddess and important figure in Aztec mythology. She is a goddess of the Earth, and stands for both fertility and destruction, representing the Aztec idea that birth and death were inseparably linked. The statue is also physically imposing and excellently carved, demonstrating the peak of Aztec craftsmanship and artistic skill. It is one of the few preserved large works of Aztec sculpture.

Coatlicue is the mother of Huitzilopochtli, who is the central god of the Aztec pantheon. She gave birth to Huitzilopochtli miraculously after placing a ball of feathers under her shirt and finding that it caused her to become pregnant. With the Spanish conquest of Mexico, Coatlicue’s role was incorporated into that of the Virgin of Guadalupe, an “indianized Virgin Mary” who integrated elements of Coatlicue into a Christian apparition of Mary. The Virgin of Guadalupe is said to have appeared four times to a native Mexican named Juan Diego in the year 1531, and spoke to Diego in his native Nahuatl, the language spoken under the Aztec empire, which had been defeated ten years prior. This “indianized Virgin Mary” figure also bears special significance in Mexico, and is said to have brought special protections and performed blessings on the native Mexicans during the beginnings of Spanish conversion efforts in Mexico.

The True History of the Conquest of New Spain is a book written by the conquistador Bernal Díaz del Castillo, describing the journey of the Spanish inland from Veracruz to the capital, Tenochtitlan, and the ensuing war between the Spanish and the Aztecs. The book was written many years after the fact, and is based solely off his own recollection of events. For this reason, it cannot be seen as a truly factual record of the events of the Spanish conquest; however, it is an excellent example of Spanish propaganda and a look into the minds of the conquistadors.

There is an apocryphal story in the True History which takes place during the stay of Hernán Cortés and his men at the village of the Totonacs. The Totonacs were the first allies of the Spanish, a group which had been conquered and (unwillingly) assimilated into the Aztec empire. The story says that Cortés ascended the pyramid-shaped altar in a Totonac village and cast to the ground the idols sitting atop it, telling all the members of the village that they were to no longer worship “those evil figures” (Díaz del Castillo 94) and instead take up the Cross and the Virgin. Although this may seem like nothing new when it comes to religious conquest, this anecdote represents the beginning of a campaign which led to the almost complete eradication of indigenous Mexican religion.

The Aztec empire was, like Spain, an empire which forced incorporated regions to take up its religion, in the Aztecs’ case, the state-endorsed cult of Huitzilopochtli. But, unlike Spain, it also freely allowed these regions to continue worshiping their own patron gods, so long as Huitzilopochtli was at the forefront of religious activities. The Spanish empire was, of course, much harsher when it came to religious assimilation: In a 2010 Pew Research Center study, more than 95% of Mexicans identified as Christians, and less than 1%— about 70,000 people total— identified with “folk religions.” And so, the question posed by this poster is: What really is the difference between the idols of the Mexicans and the icons of the Christians? 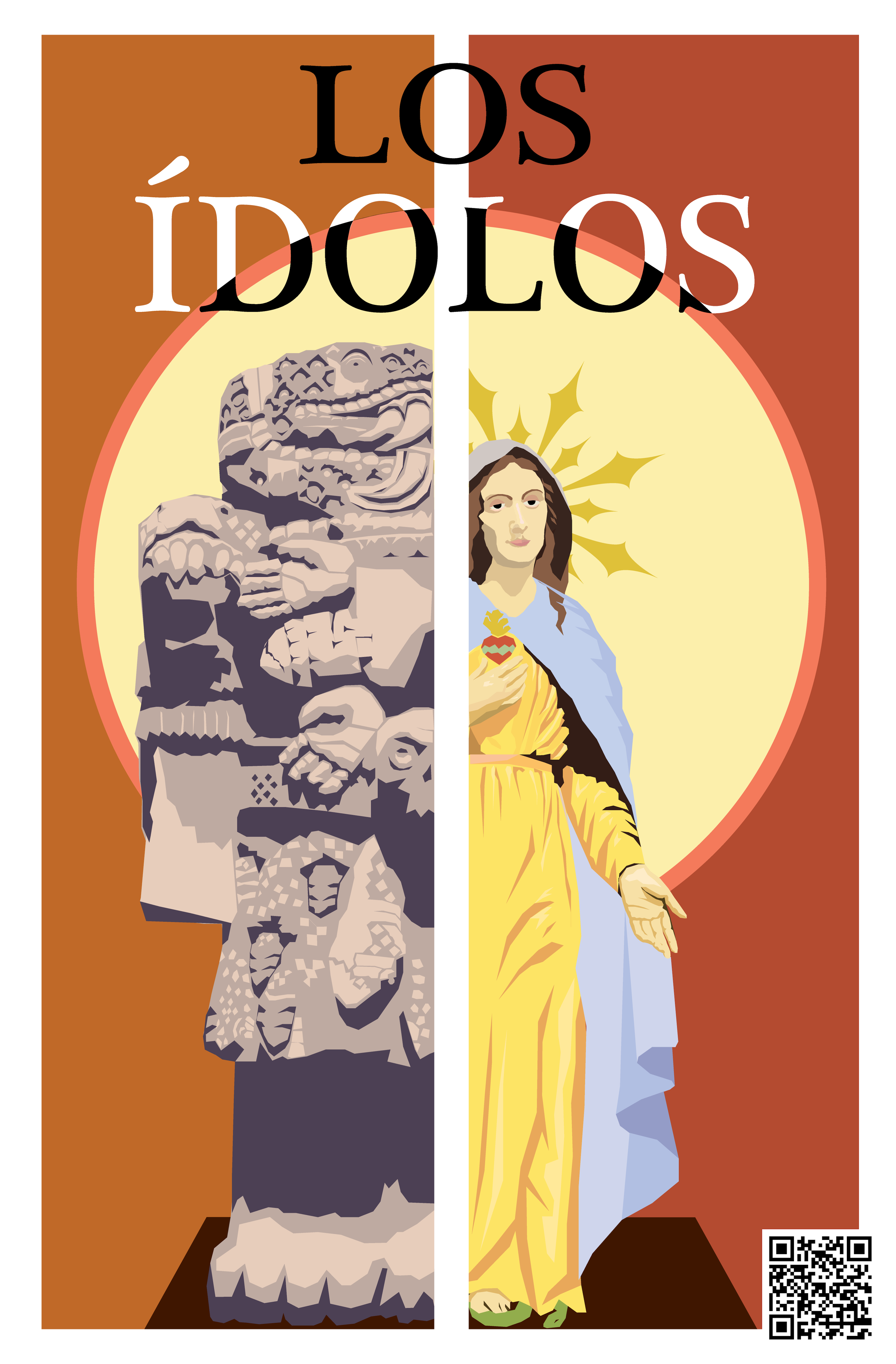 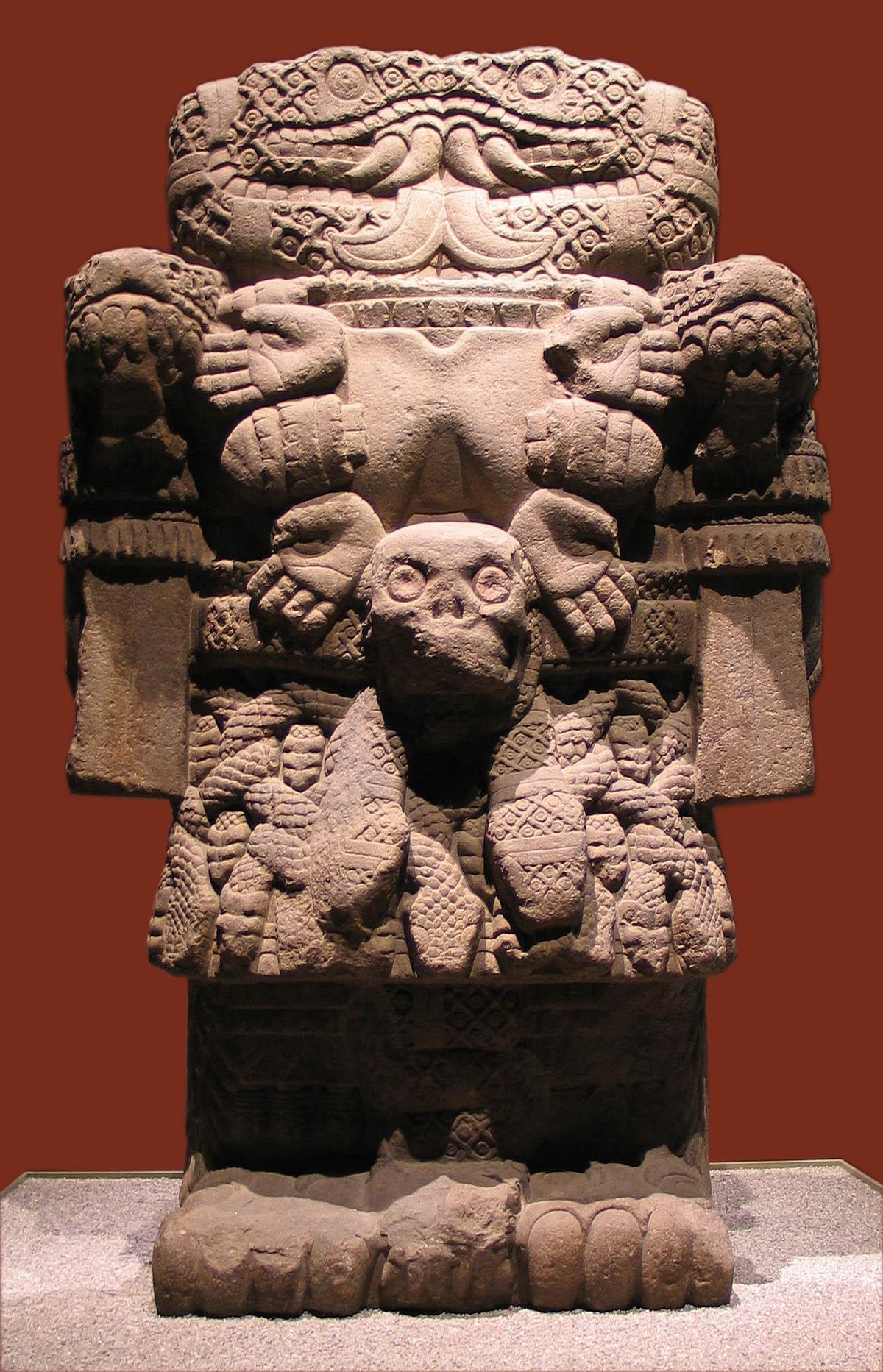 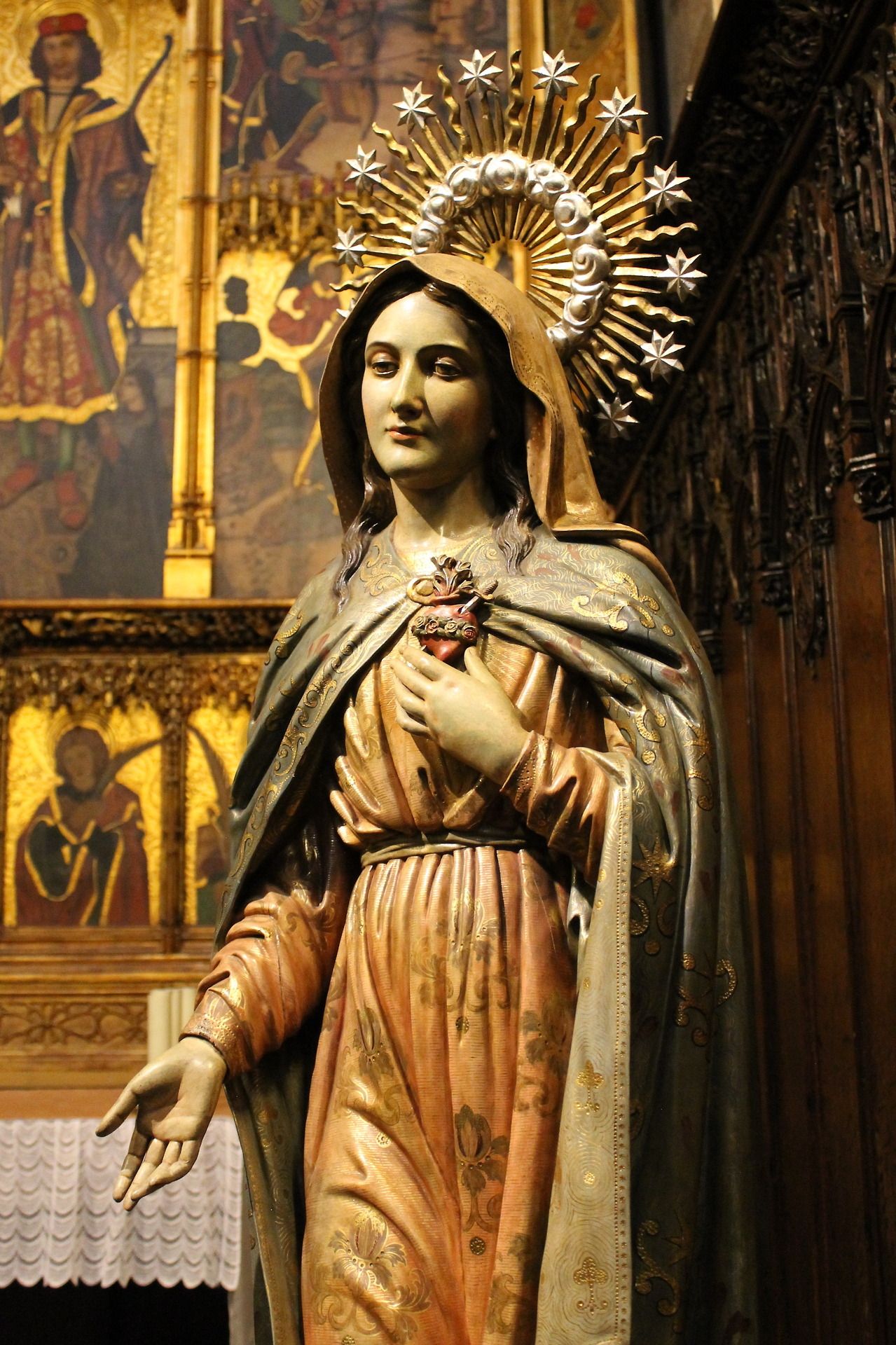 
The statue of the goddess Coatlicue (left) is considered "the masterwork of the Aztec [...] stone sculpture" (Aguilar-Moreno 19) and stands proudly in Mexico City's National Museum of Anthropology. Her skirt, as well as many parts of her body, are replaced by snakes, and she represents the eternal cycle of birth and death— the oneness of two things often considered separate and opposite.

The image of the Virgin Mary (right) dwells in the Cathedral of the Holy Cross and Saint Eulalia in Barcelona. The cathedral was consecrated in the year 1058 and is a major tourist attraction. Both Coatlicue and Mary are mother figures and gave birth miraculously to the central figure of their respective religions. Snakes create Coatlicue's form; Mary is often seen stepping on a snake, which is representative of victory over sin.

But the two images couldn't be more different. Coatlicue is the earth, death, and birth; Mary symbolizes innocence, purity, humility. The statue of Mary is the height of a person; Coatlicue's image is nine feet tall. Despite these differences, the two figures are synthesized in the form of the Virgen de Guadalupe: Apparent opposites combined seamlessly, much like the duality for which Coatlicue stands.